The Australian Writers’ Guild has today submitted its response to the Streaming Services Reporting and Investment Scheme Discussion Paper, arguing that the minor reforms proposed by the Government in the Scheme are insufficient to lay the foundation for the robust, sustainable and internationally-competitive screen industry that the Government claims to support.

The Australian Writers' Guild, along with 13 other preeminent screen industry guilds and associations representing the interests of thousands of Australian screen industry practitioners in front of and behind the camera, has responded to the Government's Streaming Services Reporting and Investment Scheme​​ in a joint submission to the discussion paper.

​Submissions to the ‘Streaming Services Reporting and Investment Scheme’ Discussion Paper were due on 24 April 2022. Many of the issues that the AWG has raised in its submission have been addressed at length in our past submissions including, most recently, to the ‘Modernising television regulation in Australia – Media Reform Green Paper’.

​The Australian Writers’ Guild is disappointed by the minor reforms proposed in the Streaming Services Reporting and Investment Scheme put forward by Minister Fletcher today.

Under the proposed scheme, which is the outcome of the Government’s work to change the free-to-air TV market and implement platform-neutral regulation, large streaming services such as Netflix, Amazon and Disney will be required to ‘report annually on their expenditure and provision of Australian content’. Should those services fail to invest 5 per cent of their gross locally-sourced revenue in producing Australian content, only then will the Minister impose a formal investment requirement.

COVID-Safe Writers’ Rooms and Your Right to a Safe Workplace

As some writers’ rooms return to an in-person format, the AWG has prepared a brief information sheet that contains current information relating to writers’ rights to a COVID-Safe workplace. This document will be regularly updated to reflect industry practice as the situation develops. 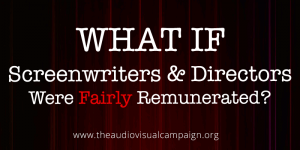 On 6 May 2022, the AWG made a submission to the Streaming Services Reporting and Investment Scheme Discussion Paper.

The AWG argued that the 5 per cent reinvestment obligation proposed under the Streaming Services Reporting and Investment Scheme will not be sufficient to reignite a contracted screen sector, let alone stimulate the growth of a robust and sustainable one, and that it will not address the market failures created by some parts of the industry being subject to regulation while others are not.

Our key positions were:

On 10 August 2021, the AWG made a submission to the Senate Standing Committee on Environment and Communications regarding the Treasury Laws Amendment (2021 Measures No. 5) Bill 2021.

On 23 May 2021, the AWG made a submission to the ‘Modernising television regulation in Australia’ Media Reform Green Paper.

The AWG recommended the following: